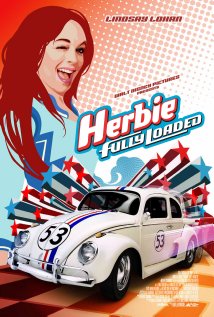 Herbie: Fully Loaded is a 2005 Disney comedy feature film about Herbie. It was the first Herbie theatrical release since Herbie Goes Bananas in 1980.

The world's wackiest Volkswagen is back in action in this action comedy. Maggie Peyton (Lindsay Lohan) is the 18-year-old daughter of Ray Peyton Sr. (Michael Keaton), a once-successful stock car driver whose career is not what it once was. Maggie loves racing and is in line for a job covering NASCAR for ESPN, but in her heart she'd rather be behind the wheel, even though her father strictly forbids this. For Maggie's birthday, Ray takes her out looking for a used car, and she finds herself strangely drawn to a wrecked 1963 Volkswagen in a salvage yard. Against Ray's better judgment, Maggie gets the car, and a note in the glove box tells her the rust bucket is named "Herbie," and he can help her solve her problems. To her surprise, the message turns out to be true -- with a little TLC, Herbie is running like new, and after showing his stuff in a street race, Maggie persuades her naysayer dad to take her and her VW on as part of his racing team. Herbie: Fully Loaded also stars Matt Dillon as rival racer Trip Murphy, Breckin Meyer as Maggie's brother (and fellow struggling driver) Ray Jr., and Justin Long as Maggie's friend Kevin.

Retrieved from "https://herbie.fandom.com/wiki/Herbie:_Fully_Loaded?oldid=3201"
Community content is available under CC-BY-SA unless otherwise noted.